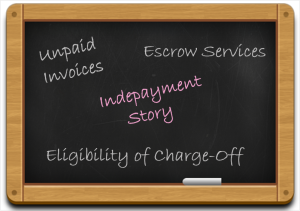 The founders of Indepayment didn’t get the idea from the sky. Their personal experience led them here. The founders were lawyers and were also a victim of nonpayment. This made them think and ended up researching that cumulative amount owed in debt was around a billion.

The team tried to collect their money by constantly calling and emailing them just to know that all their efforts were in vain. Being lawyers, they knew that filing a case would only cost them money and time.

This struck them with an idea leading to the birth of IndeScore which would score and repute the companies based on their payment. But to make that work they needed people to tell them who owed them money. So they decided to collect unpaid invoices for free, inviting several freelancers, small businesses and independent workers.

Later they realized collecting debt for a single person is futile but collecting thousands of debt is a business. Hence deciding to develop their own network to collect the funds. They offer a series of services.

Indescore is a list that tells you about the credit worthiness of a company or individual. These scores are completely user generated, by the people who haven’t received their money. The Indescore ranges from a scale of 1- 10. The higher the value the higher the company is quick enough to pay their debts.

Indepayment helps you collect your unpaid invoices. They do not ask for any money before collecting your debt. Yes, that’s right, you don’t have to pay any money unless you get the money. Indepayment reports the status of collection whenever you ask. They charge $99 if the debt is paid by their collection efforts. If the debt is paid with the help of their debt collecting partners, they charge 35% of the collected amount for their partners apart from their flat fee of $99.

Why complete the work and then wait for the payment without any assurance? You can escrow your funds with the help of Indepayment and work freely without having to worry about the payment. Once the milestone is reached or project is completed, you can demand your fund. If there is any dispute, Indepayment will be there to resolve it. Indepayment also allows you to decide your own terms and conditions.

Indepayment will check the eligibility of “charge-off” once you have registered your debt. If your debt is eligible you will get an option to “charge-off” the debt where you can sell it to debt investors. In such cases the risk of non-payment is also transferred to the debt investor. However you don’t get much for the debt. You get 4 cents for a dollar for debt.

I am ToOLOwl. I have few friends in my nest; whenever someone requests a tool’s review or I pick a one out of my interest, someone in the nest does research on the tool, someone takes a tool’s walkthrough and some of them share their experiences and expert advice. Based on all; I give it a  stereoscopic vision and present important insights for you to go through and ease your selection process for tools. Wish you Happy reading, Easy choosing.
Previous HR management Tools Product Review- ZoomShift
Next Top Collaboration Tool for small business Product Review- Attach