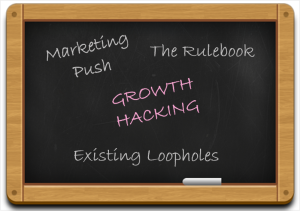 Growth hacking has created a hype amongst startups and small businesses. Everyone has their own concepts about this term and some are coining newer definitions for it. Growth hacking maybe a lot of things, but there are some things that it is definitely not. Let’s discuss some of those things:

Everyone is looking for that one rulebook called growth hacking that will instantly bring success to their product, but, that rulebook does not exist. Don’t expect others to plan out the whole growth hacking journey for you. Sure, you can learn from the examples that are set up by some giants in growth hacking or you can observe some tried and tested methods to find out what practices work or rather which ones are sure to fail but it’s ultimately you who has to make decisions for every step you take. There’s no guarantee that what worked for others will work for you too. The rules of growth hacking keep changing according to changes in technology or people’s mindsets so we can say that it has no definite rule. Sure, there are some best practices, but growth hacking is more about one’s attitude, creativity and willingness to experiment and bring about a change.

Myth 2#People will come because I built it

Gone are the times when products used to sell solely on the basis of organic word of mouth. The internet is flooded with so many apps, you can’t expect that people will just happen to know that yours is the greatest of them all. Admit the fact that there is high competition out there and you need some sort of marketing push for people to come to you. No matter how good your product is, it has to be discovered at some point. The quality of your product definitely matters, but you’ve got to let people know that you have an awesome solution to offer.

Myth 3# It’s something to be suspicious about

Just because it has the word ‘hack’ attached to it, people think there is something suspicious or illegal about it. Growth hacking does require tricks and strategies that are not part of the traditional marketing rules, but that does not mean there’s anything unethical about it. Growth hackers try to penetrate the system through existing loopholes or generate anti-competitive tactics through algorithms, sometimes also perform reverse engineering, but those aren’t illegal tactics and they require creativity and out of the box thinking to succeed.

Some other points that people should be clear about is that viral growth requires a lot of experimentation and quick thinking. One should rather get to work, start creating and experimenting than just reading and gathering knowledge about growth. Also, many people have their main focus on acquiring more and more users without focusing on what their existing users want. They should know that it won’t serve the purpose of growth until they offer the best they can to cater for the needs of their existing users.

I am ToOLOwl. I have few friends in my nest; whenever someone requests a tool’s review or I pick a one out of my interest, someone in the nest does research on the tool, someone takes a tool’s walkthrough and some of them share their experiences and expert advice. Based on all; I give it a  stereoscopic vision and present important insights for you to go through and ease your selection process for tools. Wish you Happy reading, Easy choosing.
Previous 3 SWOT Analysis Tools for Small Businesses
Next Google Tactics for SEO Part III