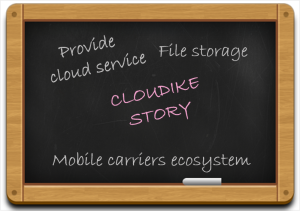 Cloud has acquired worldwide attention for storage and security, nurturing data from various sources. Back in 2013, Dropbox, Microsoft, and Google were the leading brand names for cloud purpose. Cloud popularity started gaining more number of data. Other than these giants, cloud startups like BitCasa and SygarSync had started to take freemiums for a company to get into the cloud. Although there have been warnings against setting cloud startups.

With a great 35 percent market share space, Mobile service providers (MSPs), like AT&T and Verizon were still making out their own cloud platform. After working on LG’s cloud platform when Sun and team examined their service, they were sure that they could do better. Therefore Dr. Sun Ung Lee along with 5 other ex-LG cloud employees launched Cloudike in 2013.

It is a file storage platform based on cloud concept. Cloudike provides a better cloud service at MSP industry. Knowing that day by day more people are migrating to cloud storage, they are more focused on mobile platforms. Cloud services are accessible over PCs to tablets to smartphones, protect files, allowing everyone to use them from anywhere, hence consists ample of usability and demand. Sun Lee is a Telecommunication and electronics veteran with a PhD. in Mechanical engineering had worked for almost 8 years in LG and LG’s cloud platform.

Cloudike providing cloud service by enabling mobile carriers to extend their own ecosystem similar to those provided by DropBox, Google, Apple. The difference would be the name of their own brand for the service which does not require R&D experience. The company initiated the work by first exploring territories that were on their way to build a network infrastructure. The goal was to target users those were some steps away from needing cloud usage, including areas like Southeast Asia, Eastern Europe, and the Middle East. On the whole that target was around 2 billion people.

The setting up in different places were not easy. In each new market, they faced many logistic and regional challenges. When serving in Eastern Europe they found web security and user authentication implementation very complex due to Internet security issues. At wherever place they have been it had to adjust to local offs and work schedules. During their first launched Cloudike with Megafon in Russia, the user login was a problem. The MSPs typically go through extensive testing, which led them to manage their launch and testing altogether. They had to manage it so to protect the data from hackers. In spite of having an excellent product with a highly experienced manpower, still MSPs wanted to see a track record. They had to find different methods to negotiate with MSPs in Southeast Asia. One of those was

The MSPs typically go through extensive testing, which led them to manage their launch and testing altogether. They had to manage it so to protect the data from hackers. In spite of having an excellent product with a highly experienced manpower, still MSPs wanted to see a track record. They had to find different methods to negotiate with MSPs in Southeast Asia. One of those was combination of profit sharing with lowered monthly maintenance fee.

The opportunities were immense as around 81 percent of all Internet users have been accessing the web in 2015 in regions like Eastern Europe. And it is anticipated that this will be raised to 87 percent till 2016. Vietnam and the Philippines are some of the names from Southeast Asia that have started using cloud services and is a good sign. After being in business for three years, they’re seasoned veterans, ready for the next challenge. They are now seeking to work with MSPs in emerging regions like Vietnam, Myanmar, and those in South America. Their aim is to provide a powerful vision of cloud services to people across the world, reaching ‘next two billion’.

I am ToOLOwl. I have few friends in my nest; whenever someone requests a tool’s review or I pick a one out of my interest, someone in the nest does research on the tool, someone takes a tool’s walkthrough and some of them share their experiences and expert advice. Based on all; I give it a  stereoscopic vision and present important insights for you to go through and ease your selection process for tools. Wish you Happy reading, Easy choosing.
Previous Surviving the First Year Creating a Business
Next Top 10 Tools for Headline Analyzer