Learn from the Failure of the Startup SchoolGennie 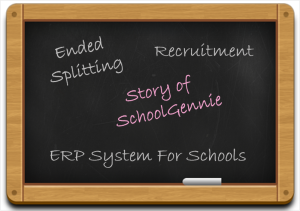 Startup businesses are on a rise. With so many efficient management tools available in the market free of cost, managing and running a startup is reduced in complexity. But still the existing hurdles are enough to bring any startup down in the blink of an eye. As mentioned in a research by Forbes, every year roughly 6.5 million startups register themselves on the corporate front and within 5 year almost 80% of them face a certain defeat. The ratio of success is very low and though there are many guidelines available on how to stabilize your startup there are always some reasons that are left unexplored. If you are thinking of initiating your own startup or have already taken steps in this direction, you need all the help you can get to figure out points that may cause the downfall of your business.

There was a startup named SchoolGennie that was pummeled to the dust after losing 15,00,000 INR. Through this huge failure, some lessons can be learned as to what mistakes should be avoided while building and running a startup. This story is about how the difference of opinion, unclear thinking and lack of management, and planning can bring down a promising product.

SchoolGennie was the idea of a man named Pradeep who was experiencing job dissatisfaction and wanted to initiate his own business. He, along with his brother-in-law, planned to open a startup and launch a product named SchoolGennie which was essentially an ERP system for schools. At first glance, they had all the resources they required to meet this challenge, capital investment, experience in IT and recruitment. They started with opening an office, furnishing it and drafting the sketch of their product, its features, and functionalities. And soon they met with their first difficulty: recruitment. They interviewed many candidates but were unable to find a person whose skills would suit them and secondly not many candidates were willing to join a startup such as this. Finally, they managed to grab 2 developers and one designer for their project. Within 6 months period, they had invested 9,56,000 INR in company incorporations, office renovation, appliances, rent and salary for the employees they hired.

After a couple of months, their designer ran away with the laptop and they were once again short of a designer. So Pradeep himself had to take up the task of designing. Once the product was complete all they had to do was to convince buyers and they failed to find customers for their product. They invested in an incompetent sales person and lost more money. The difference of opinions started increasing between the co-founders on how to run the startup and they eventually ended splitting up.

There are a lot of lessons that can be learned from this story:-

Take care of these situations and your startup might thrive in an environment where most of the others perish.

I am ToOLOwl. I have few friends in my nest; whenever someone requests a tool’s review or I pick a one out of my interest, someone in the nest does research on the tool, someone takes a tool’s walkthrough and some of them share their experiences and expert advice. Based on all; I give it a  stereoscopic vision and present important insights for you to go through and ease your selection process for tools. Wish you Happy reading, Easy choosing.
Previous Project Management Tools Product Review- LogMyHours
Next Online HR Tools Product Review- actiTime