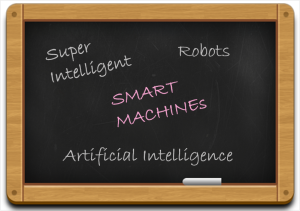 Artificial Intelligence is about to rule the world with self-driving cars to drones, and from smartphones to robots. We have robots everywhere, robots who can assist us, robots who can be our slaves and who can simplify our life a hundredfold. We, the humans are the ones who know how to make them and raise funds to research and design them.

AI has been with us since 1950’s, but we didn’t really called it as Artificial Intelligence. According to Dr. Roman Yamploskiy, Director of Cyber Security Laboratory, and a Computer Scientist, Artificial Intelligence is everywhere- in your phones, in your cars, its Google, it’s every bit of technology you are using.

But AI has experienced an explosion in the recent years- a new weapon in warfare, for example may use extreme intelligence to target enemies with specialized cameras and advanced sensors. In Chengdu, China, a company Foxconn who makes Apple and other electronics has just built a factory run entirely by robots.

What’s next expected is- Superintelligence, intelligence beyond human. Machines are being empowered to be super-intelligent. Many big companies and firms are hiring the brightest of minds and scientists are working hard to impart highly advanced thinking and analytical capabilities to the machines. Capabilities which make them:

What kind of devices will we see that have these abilities?

The Smart Machines can be imparted with knowledge that they can compete humans in terms of skills and intelligence.  According to Dr. Yampolskiy, a Turing Test was developed in 1950 to test machine’s ability to perform in a way that could not be differentiated from a human and the Turing Test has been passed.

I am ToOLOwl. I have few friends in my nest; whenever someone requests a tool’s review or I pick a one out of my interest, someone in the nest does research on the tool, someone takes a tool’s walkthrough and some of them share their experiences and expert advice. Based on all; I give it a  stereoscopic vision and present important insights for you to go through and ease your selection process for tools. Wish you Happy reading, Easy choosing.
Previous 11 Ways to stay updated with the Trending Technology
Next What’s Really Happening with Advanced, Pervasive and Invisible Analytics