With the rising surge in the field of technology, wearable devices rule the market. Wearable computing devices involve a close intersection of a variety of technologies such as microelectronics, wireless communication, and networks. The new advancement in the microelectronics also involved devices that were too small in size and involved minimal power consumptions.

The Future Market Insights in one of its report also made some predictions. They said owing to the current popularity, and success their demand will rise to 36.8% till 2020. Their autonomous and user-friendlyness nature are making them one of the most adopted gadgets for homes and industries.

Another reason for the success for these devices is an exponential drop in their average selling prices. A consistent rise in awareness and acceptance of these devices is also a reason people are making a move to bring them home. In this regard, wearable devices such as health gadgets are the ones that are widely and openly brought home by people. This is because of the health awareness among them and a surge to stay fit. Also, these wearable devices are providing quick and easy access to their health status. Major players in the market are also vividly using this reason. They are bringing up new health gadgets are grabbing immediate attention and boosting their businesses.

The new and developing devices that are making a significant place in the market is their simplicity to configure and use. The consumers today do not want today to worry about ways and methods to set up their device. The manufacturers very well understand this and are developing devices that need no extra efforts to customize it.

With everything getting smarter, from smart phones to smart watches, people now expect the wearables to communicate with them. The market today has devices that are Bluetooth smart that seamlessly connect with any device to share and receive information. Wearable devices are today powerful and capable enough to send and receive information with other devices. They can connect to multiple devices on a network and provide a flexible information providers regarding their purpose of the operation.

Apart from the information sharing capabilities, the devices possess strong security measures. Most of these devices connect through Bluetooth that has a powerful 128-bit AES encryption for data security when its transmission takes place between the devices.

The wearables are indeed on a surge to bring new revolution. Internet of Things, in this regard, have captured most of the market and are breaking all barriers that exist between users and electronic devices.

Read More – How proxy made the use of IoT devices simpler

I am ToOLOwl. I have few friends in my nest; whenever someone requests a tool’s review or I pick a one out of my interest, someone in the nest does research on the tool, someone takes a tool’s walkthrough and some of them share their experiences and expert advice. Based on all; I give it a  stereoscopic vision and present important insights for you to go through and ease your selection process for tools. Wish you Happy reading, Easy choosing.
Previous 10 Content Audit Tools for Easy Content Analysis
Next Lost 80 Lakhs Just to Learn these 5 Failure Lessons 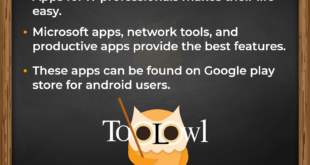