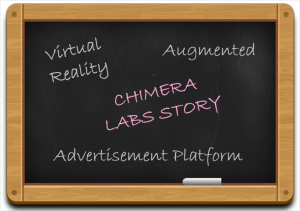 Virtual Reality is an emerging star in this era of technology. Using VR platform companies are building benchmarks and introducing revolutionary changes in the tech world. A VR-based company- Chimera Labs is the world’s first VR advertisement platform creating future of immersive advertising. The company founded by two IIT-Mumbai alumni Sushil Kumar and Smeet Bhatt. Sushil is a Computer Science graduate and carries the experience from Qualcomm and Zovi.com companies. He has also done MBA from IIM-Ahmedabad. Smeet is a Civil Engineer and has work experience of 2 years as the Fixed Income & FX division at Deutsche Bank. From the college days, they were fascinated towards Virtual Reality. Susheel was interested in graphics and 3D tech. Smeet was interested in gaming and had worked on new VR enabling technologies.

Business in VR was not their plan initially and then one day the idea came to their mind. It was the day when Smeet arrived at IIM-A from Mumbai to meet Sushil. They together landed in Mumbai where one of their friends showed them the Oculus DK2. Impressed by the technology they made a move to produce a VR platform that can work for any VR device. They noticed a high potential in the VR sector and thought of incorporating the emerging platform in the business. Finally, after the in-depth research, the duo decided to apply the technology for Tourism industry and started to build VR content for it. Smeet shares that the idea was to make an immersive experience of “visiting” and “feeling present” at famous spots of the world like Taj Mahal, Eiffel Tower, and the pyramids.

Hurdles In The Venture

The journey was not that effortless and easy. After listening to the concept, many brands refused to sign any agreement with them as the brands found the idea was not good. Thus, making it hard for the duo to find any monetizing and they settled in Bengaluru looking for the engineering talent. The pair thought to bring Content studios and developers to their platform to deliver an engaging and immersive experience to global companies.

Following the way, developers could make money by partnering with ad networking firms and Chimera Labs would also get the benefit of serving as the bridging platform between consumers and brands, where consumers can interact with wide variety of brand products. Ultimately,  Chimera Labs will operate as a VR-based ad network.

According to Smeet, their product holds two side application. Ad networks and developers on the one hand that uses it to increase traffic to their apps and games. The another side is for advertisers to target their audience and deliver a new level immersive experience in VR with their products.

A new report by MarketandMarkets anticipated that the global market of Augmented Reality will reach $117.40 billion by 2022. On the other hand $ 33.90 billion for VR market.

On a local scale, some Indian companies are building VR technologies, which includes the names such as Meraki, SmartVizx, Absentia, and Tesseract. Among these, SmartVizx has raised $500,000 in funding for its VR platform while Meraki is providing VR for tourism immersive technology. These all are developing VR firms in India.

Chimera Labs being the first ad platform is targeting every VR technology in the world. Sushil and Smeet are the only members. They have made the investment of nearly 10 Lakhs in the venture. Smeet says that their business model is similar to any ad network where the revenues from the advertiser are shared with the partner publisher. In return, the ads get a place over their apps and games used by consumers.

A very renewed VR tool Octopus made this sector active in 2012. Inspired by it many hardware companies started developing VR Headsets. Along with the use in movies, games, tourism, education sectors, it also has applications in healthcare, military and design. Tech giants like Facebook and Google have acquired some VR tools, and that enlarges the opportunities for VR platforms

Read Also: Shutting down of walnut for better one

I am ToOLOwl. I have few friends in my nest; whenever someone requests a tool’s review or I pick a one out of my interest, someone in the nest does research on the tool, someone takes a tool’s walkthrough and some of them share their experiences and expert advice. Based on all; I give it a  stereoscopic vision and present important insights for you to go through and ease your selection process for tools. Wish you Happy reading, Easy choosing.
Previous Best CRM Tool for startup Product Review – NetHunt CRM
Next Small business Accounting software Product Review- TrackWealth