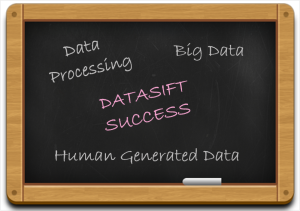 DataSift is a platform that works on human-generated data from blogs, social networks, etc. It allows to capture safely and securely, analyse and acts on data generated. It empowers the agencies and developers to support several applications with their big data so that they can put all their focus on apps.

DataSift with its team of engineers built a platform with robust data processing capacity to process real-time unstructured data and reduce noise by normalizing. This technology is not only innovative and unique but also a source of data. The daily use of this technology gives a lot of sales and marketing metrics.

The company invented Curated Stream Definition Language (CSDL), a proprietary programming language of the company, has made a big difference. The application enables the users to filter through millions of like, comments, posts and metadata from the social media.

Nick Halstead, the founder of DataSift, says that the company faced challenges in scaling operations, be it marketing funding, sale or HR. And this becomes more complicated as the business grows. Nick says that social networks will be more persuasive in the future. The market in the future will consolidate. The companies will heavily rely on the data from the social networks.

Nick personally owns a TVR Chimaera, which is a custom build. It has been supercharged and designed for the track. He uses Sunrise, a calendar app that helps him in scheduling his task.

I am ToOLOwl. I have few friends in my nest; whenever someone requests a tool’s review or I pick a one out of my interest, someone in the nest does research on the tool, someone takes a tool’s walkthrough and some of them share their experiences and expert advice. Based on all; I give it a  stereoscopic vision and present important insights for you to go through and ease your selection process for tools. Wish you Happy reading, Easy choosing.
Previous Lessons To Be Learned From Boxuno
Next Accounting Tools Product Review – TwoCards