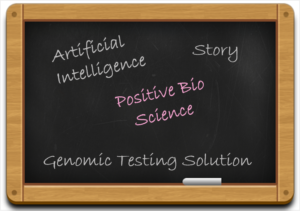 Samarth Jain, co-founders of Positive Bioscience was first introduced to the world of genetics while working on Wall Street in the year 2011. He was fascinated by the fact that how genetics and genes work, and help determine diseases and their impact on the healthcare. Samarth came up with the idea of Bioscience in 2012 which was then formally launched in 2014.

The motive behind Bioscience was to transform people’s health by integrating genomics, Artificial Intelligence (AI) and Big Data. The idea was to make genetic testing more accessible and affordable to change the healthcare outcome.

Also, the Positive Bioscience team spent a lot of time, the time close to two years understanding the market, developing the technology and products. Soon, the application was started as a genomic testing solution to help cancer patients recover also preventing healthy individuals from falling ill. The team launched personal genomics and cancer genomics in August 2014.

The team needs the genomic data for a patient once that is collected. They use Big Data analytics, AI and advanced machine learning techniques to correlate the genetic profiles, the drugs administered, and the survival outcomes. The Positive Bioscience team have their AI computing platform, called the Positive Intelligence that does a scan process through every drug available depending on the response levels of the body. This technology helps the team suggest drugs that are mostly successful in treating the patients.

The personal genomics tests by Bioscience look for genetic mutations that can predict the risk of several diseases in healthy individuals. The team identifies the risks, and the councilors explain the report. It also suggests a personalized prevention plan to mitigate the risks for these diseases.

Building the perfect team for Positive Bioscience was a tough task, though. As there are only a few people who possess the right expertise and understood their vision. Also, it was another challenge to collect people who have a keen interest in this field. They did this by aligning both medicine and engineering to meet the company goals.

As the team started organizing events, conferences, and symposiums, Samarth met people who showed interest in genomics, had appropriate experience and was excited to join the team.

One of the biggest accomplishments of this team was to accede the biggies in the country. Positive Bioscience, launched a personal genomic clinic at Medanta, the Medicity Hospital in Gurgaon. Also, soon they collaborated with Kokilaben Dhirubai Ambani Hospital in Mumbai to launch Mumbai’s first genomics clinic.

Another accomplishment added to the team was last year when the world’s number one molecular diagnostic company – US-based Myriad Genetics approached them for partnership. Myriad Genetics is well known for discovering BRCA gene testing for breast cancer.

Read Also: Shutting down of walnut for better one

On the Growth Ladder

The team witnessed an exponential growth in the past two years. They claim that their genomics cancer product saw a rise of 250%. They also look forward to seeing an over 300% increase in personal genomics in the next coming year. Shortly, the Positive Bioscience team wish to expand the cancer genomics space.They want to sequence 2 in every ten cancer patients in the country over the next three years. The team is planning to partner more than 200 big hospitals to start personal genomics centres.

I am ToOLOwl. I have few friends in my nest; whenever someone requests a tool’s review or I pick a one out of my interest, someone in the nest does research on the tool, someone takes a tool’s walkthrough and some of them share their experiences and expert advice. Based on all; I give it a  stereoscopic vision and present important insights for you to go through and ease your selection process for tools. Wish you Happy reading, Easy choosing.
Previous Growth Hacking Tools Product Review- Napo.ly
Next Marketing Tools Product Review- Start A Fire

How To Evaluate New Emerging Technology For Your Business

Tips for Launching a High-Risk Startup

A startup from Sweden is planning to launch a completely new business startup, the Pogo …