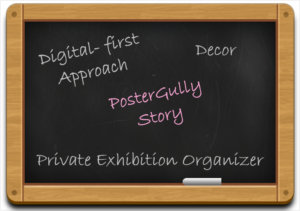 PosterGully is a potential fast growing e-commerce space in the country. It has recently gone under the hands of Sumit Gandhi and Manish Gandhi. The two personalities are the promoters of Asian Business Exhibitions and Conferences (ABEC).

Acquisition amount of PosterGully is not known to the world yet. In association to the details, PosterGully is a Delhi-based marketplace. It is famous for artists, designers, and creative individuals to exhibit their collection in home décor, apparels, furnishing and much more.

More About the Promoters

In relevance to the market value of ABEC, it has 10-12% market share in India. The occupancy of market share makes it one of the largest private exhibition organizer in the country. Contributing to the occupancy of market shares, Qatar’s leading investment bank QInvest acquired a minority stake in ABEC. The company ABEC also organizes ACETECH which gets recognition for conducting the India’s largest and world’s third largest exhibition for exhibitors such as architecture, design, construction and materials for the same. ACETECH has spread its reach in around five cities, and over 600k visitors attend the exhibition each year. The large-scale exhibition experiences the presence of architects, interior designers, consultants, planners, developers and others as well.

Announcing the acquisition of PosterGully, Manish Gandhi said, “The team at PosterGully has displayed true signs of grit over the last few years.  building a solid, thriving community led e-commerce marketplace that has performed admirably on all accounts: business growth, cost metrics, customer experience, and quality of execution. With this acquisition, we are committed to a digital-first approach across all our businesses”.

Bharat Sethi owned the curated marketplace since 2012. Since the land will be in the acquisition by the promoters of ABEC organizers, Bharat Sethi will join the advisory board. It will take charge as an Executive Director and CEO of iDecorama. The company is in association to design, build and remodel industry online which is also pillared by Gandhi Brothers.

In addition to the development over last two years, Bharat Sethi said, “We’ve gone onto creating a fundamentally sound business and this is a perfect match that has the use of all the skills the core team of PosterGully has garnered over the years, especially around growing online communities and blending content with commerce. The buyers have a compelling vision for the future and I’m confident that PosterGully’s customers, community, and partners will benefit from these exciting new developments. We’re going to have a bigger team with bigger resources solving bigger problems.”

I am ToOLOwl. I have few friends in my nest; whenever someone requests a tool’s review or I pick a one out of my interest, someone in the nest does research on the tool, someone takes a tool’s walkthrough and some of them share their experiences and expert advice. Based on all; I give it a  stereoscopic vision and present important insights for you to go through and ease your selection process for tools. Wish you Happy reading, Easy choosing.
Previous Preksh Aligning Virtual Reality with Online Shopping
Next Project Management Tools Product Review- Nikabot