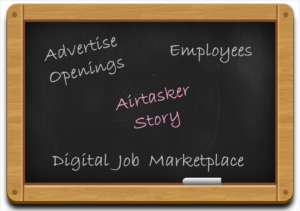 An Australian company Airtasker has experienced a rapid rise in its revenue in its funding round recently. It is a digital job marketplace for all those people who are seeking a change in their job or who have recently completed their college education.

Airtasker announced in May 2016, that it has successfully raised a series B round of A$22 million ($16 million). Some of the investors, such as Seven West Media which is a local media company with National Roads and Motors Association actively participated in the 2015 round. Also, the company boasts its progressing by stating that, adding to the new round this year, the company has A$32 million ($24 million) since it was founded in 2012 by Tim Fung and Jonathan Lui.

According to the Airtasker team, about 3.5 million jobs are available each month. And so are the resources to fulfill them. This can be the best approach to bring work to people and the vice versa. The presence of 60,000 community members in Australia is also one of the boons for the job market.

Fung, the company CEO looks forward to re -invest all the revenue earned by the company. The three primary goals for Airtasker are –

The motivated team is expecting to announce a number of new collaborations in July 2016. They also offered a hypothetical partnership with Ikea as an example. Co-founders Tim Fung and Jonathan Lui are not looking to expand its branches out of Australia presently; rather they believe that the Australian market itself is worth of billions of dollars.

The co-founders of Airtasker are no doubt confident in their business plan. Besides Airtasker, the Australian market also witnesses other similar platforms. Being well aware of them, Fung confidently says that Airtasker has made its customers through verified trust. They have been following a different approach for this business and are pretty sure they will outstand this market shortly.

I am ToOLOwl. I have few friends in my nest; whenever someone requests a tool’s review or I pick a one out of my interest, someone in the nest does research on the tool, someone takes a tool’s walkthrough and some of them share their experiences and expert advice. Based on all; I give it a  stereoscopic vision and present important insights for you to go through and ease your selection process for tools. Wish you Happy reading, Easy choosing.
Previous Hypertrack Tracking ecommerce Business like a Pro
Next Marketing Tools Product Review- Boost the News