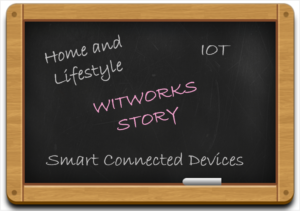 Witworks is a Bengaluru based IoT company. It has recently raised an undisclosed amount of funding by Fireside Ventures and a group of angel investors. Top executives such as Anupam Mittal (Founder, Shaadi.com), and other prominent businessmen participated in this round of funding.

Witworks inclined the current round of funding towards its launch of the smart wearable platform, BLINK. And for this project, the founders look towards pulling investors who have a strong vision of building a new-age consumer technology brand.

Witworks is a project by a team of three IIT Kharagpur alumni – Ankit D.P, Somnath Meher and Chandrashekhar Iyer. The company is currently working with a team of 20 people. The offices lie across India, Shenzhen and Hong Kong.

The company makes smart connected devices in home and lifestyle space. Witworks’s other project was a successfully designed, manufactured and launched a simple earphone called Rewind which sold almost 40,000 units.

BLINK, on the other hand, is a wrist wearable platform that provides access to information and services when you are on the go. It uses Witwork’s voice-enabled operating system- Marvin OS (Android-based). According to Chandrashekhar, BLINK also incorporates over 25 years of experience. This was possible with the support of traditional watchmakers leveraging a partnership with the latest manufacturing facilities in the world.

The founder says, the Android-based operating system gives them new opportunities to work on wrist wearable devices. This technology will add a new charm in the market as watches are at an interesting stage at this point in time. With high-end technology, consumers hold high eagerness towards these gadgets to bring home. Lack of use –cases, ease of interaction are some of the factors that are preventing them to take off in the market. BLINK, therefore, incorporates the best of technology to develop a smart wearable for interested buyers.

BLINK simplified user’s interaction with technology by removing any dependency of sending data through apps using push notifications outside the app. This made it simple and quick to use the application and finally the wearable product.

Witworks is the only firm that will be selling BLINK at an estimated price of $200. The founders target to bring about 20,000 units to the market by December this year. They also look forward to reaching $4,47- 5.9Mn (INR 30-40 Cr) revenue by the year 2017. They are also planning to raise Series A round of funding the coming 6-8 months.

I am ToOLOwl. I have few friends in my nest; whenever someone requests a tool’s review or I pick a one out of my interest, someone in the nest does research on the tool, someone takes a tool’s walkthrough and some of them share their experiences and expert advice. Based on all; I give it a  stereoscopic vision and present important insights for you to go through and ease your selection process for tools. Wish you Happy reading, Easy choosing.
Previous 10 Easy Ways to Help Streamline Business Meetings
Next Witness the Unbound Growth of CRM by 2025

What Small Businesses should know all about ‘Metaverse’