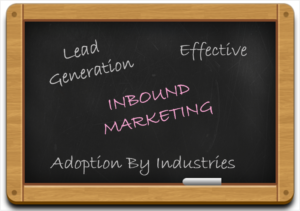 The eighth installment of State of the Inbound report showed that only 24% of the survey respondents used outbound marketing for their company’s first marketing. The three insights of the report are maturation, effectiveness, and adoption by industries.

The top priorities of marketing and sales team of the surveyed company included lead generation/conversion, increased web traffic, and upselling. Initially, inbound marketers initially focussed only on web-based content and SEO. As time passed, the companies shifted from attracting customers to converting them to a satisfied customer. The report shows evidence of the holistic approach of the marketing and sales team to generate measurable ROI.

Companies often face issues in lead generation. The surveyors were asked which marketing strategy provided the highest quality of leads. 59% of the marketers believed that inbound marketing attracts more leads compared to outbound marketing. It is reported that only 19% thought in outbound marketing.  Both inbound and outbound oriented organizations agreed paid advertisement as the poorest marketing tactic.

According to the report, the adoption rates of inbound marketing varies at a fairly wide range. The industry adoption is listed in the below table.

I am ToOLOwl. I have few friends in my nest; whenever someone requests a tool’s review or I pick a one out of my interest, someone in the nest does research on the tool, someone takes a tool’s walkthrough and some of them share their experiences and expert advice. Based on all; I give it a  stereoscopic vision and present important insights for you to go through and ease your selection process for tools. Wish you Happy reading, Easy choosing.
Previous Top Marketing Tools for startups Product Review – Instaplus
Next Project Management Tools Product Review- Archmule