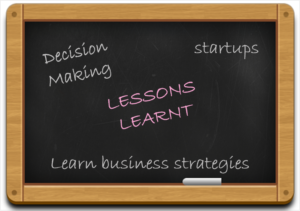 It is a known fact that “One learns from his mistakes.” You may know people who committed some mistake and later learned a lesson from it. But can you imagine a person who committed the same mistake 17 times just to learn decision making..??? Shocked, aren’t you….??? And now you must be thinking who that person was? Why did he commit the same mistake again and again?

What did he learn from it? So, to answer all your questions we have a story of Brian Corrigan, a man who worked in 17 startups to learn decision making.

Now you must be thinking why working in a startup is a mistake….??? Of course, it is not a mistake rather it is an open opportunity to know and learn about the business world. But there also exist a huge failure risk and that makes people hesitant towards them. But the hero of our story Brian Corrigan was not afraid of it. Rather he was very enthusiastic to work with startups because it always gave him the opportunity to learn from the success and failures of the company.

Out of 17 startups that he worked in, one was his own, in some, he worked as the CTO, and to the remaining, he provided consultancy services. Most of them were hyper growth angel funded companies and the remaining were smaller enterprises. Some of them turned into bigger successful firms, while others failed right away. Now the question is how did it help him in decision making? Well, the answer lies in the decision-making strategies discussed below that he learned working with various startups.

Following are the strategies that help you take efficient decisions:-

Don’t be in a rush to make decisions. In agile methodology, the most important thing is flexibility towards change. And if decisions are taken too early it becomes a problem for the organization as the system becomes resistant to change. Thus is always advised to take last minute decisions because it gives you the power to change.

Always make smallest decisions first. Don’t be in a hurry to make a master plan, because master plans usually do not work. It is always advised to break decisions into a smaller one because small decisions are efficient and easy to implement.

Try to engage every person in the organization in decision making. Because making decisions behind closed doors is too frumpy for this new generation. Inform every person about the event that is to occur or the decision that has to be taken. So that everyone has some knowledge of the organizational activities.

The above story taught us how working in a small startup helps you make intelligent decisions and also surrounds you with ample opportunities to closely analyze success and failure. It gives you the opportunity to be a good decision maker and a good learner. And as it rightly said that “Learning never ends”, every phase of life teaches us a new lesson. So keep your eyes and ears open and keep learning.

I am ToOLOwl. I have few friends in my nest; whenever someone requests a tool’s review or I pick a one out of my interest, someone in the nest does research on the tool, someone takes a tool’s walkthrough and some of them share their experiences and expert advice. Based on all; I give it a  stereoscopic vision and present important insights for you to go through and ease your selection process for tools. Wish you Happy reading, Easy choosing.
Previous 10 SEO Link Building Tips for 2018
Next Top Marketing Tools Product Review- Seomator