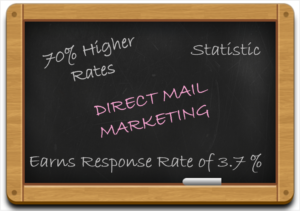 In a survey, about 54% of consumers said that they want to receive emails from their favorite brands:

Advertisers in the United States spend an amount of $167 per person on direct mails. In return earning an amount of $2,095 by selling goods and scored a $1,300 per return.

A study conducted by the response driving power of direct mail found that:

Read Also: How To Set Up A Successful Outbound Email Campaign

The average ROI for direct mail campaign is between 18 to 20 percent. Also, 56 percent of customers who responded to the direct mail visited the physical stores or went online to the stores. 62 percent of consumers in case of the direct mails in the past three months made a purchase.

Many marketers said that email marketing is now no longer active. Also, many people claimed that direct marketing is already dead. But statistics say a different story; many researchers say that a perfect combination of both the two can do wonders. Both the methods, if used wisely can generate a high Return on Investment for your business.

I am ToOLOwl. I have few friends in my nest; whenever someone requests a tool’s review or I pick a one out of my interest, someone in the nest does research on the tool, someone takes a tool’s walkthrough and some of them share their experiences and expert advice. Based on all; I give it a  stereoscopic vision and present important insights for you to go through and ease your selection process for tools. Wish you Happy reading, Easy choosing.
Previous Top 10 LinkedIn Errors You Can Easily Avoid
Next What Are The Simple & Effective Ways To Update Old Content?

How To Evaluate New Emerging Technology For Your Business

Tips for Launching a High-Risk Startup

A startup from Sweden is planning to launch a completely new business startup, the Pogo …