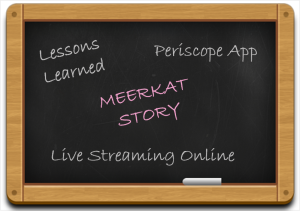 The Meerkat witnessed a quick rise to fame soon after it hit the market, but the product did not survive for long. The probable reason for the downfall of Meerkat can be assumed is Periscope. Periscope was another app which came to the market and flourished more vibrantly at the same time Meerkat was launched and was working.

Every feature and functionality Meerkat was offering, Periscope offered with a better manner covering almost all the prospects and targeting more audience than Meerkat did. The people who worked behind it, struggled a lot in regulating live streaming sessions offering advance and answering questions from budding entrepreneurs. All these activities became stagnant with time. The exposure team experienced, started to become still and they could not figure out the reason behind it and this led to a loss of confidence in the tool.

Meerkat, along with Periscope offered live streaming online and witnessed a rapid rise in users, but soon after living a lavish life, Meerkat died an embarrassing and ugly death.

Back at the beginning, the mobile streaming application announced $14 million by the U.S tech journalists in the month of March 2015. The market was unable to meet the user’s expectations as was announced in the media as the “new hot app” or the “breakout app”, all the promotions that were carried out were misleading and the application did not serve that well as was promoted across the media.

Many Meerkat power users diverted from Meerkat towards blam.im, which was one of the trending web streamers in the mobile application stream, also its simple and familiar usability features grabbed all the users, even from Meerkat.

Unlike Periscope making the app more popular with the celebrity involvement, Meerkat also indulged in relating the app with celebrities in order to gain more popularity and success. But here too, Periscope took all over the attentions as they were the people, which, in addition to adding the celebrity touch, did not make major changes to the basic functionalities and core features to the application.

It also hired a bunch of people for social channel and media coverage and to manage it over the internet, as a result, the basic functionalities of the application were unable to perform to their best and this led to the downfall of the application.

Meerkat had a leaderboard feature, the users of Meerkat achieved high rank on the leaderboard, by obtaining high scores. And the ones who achieved a high score and a high rank, ultimately achieved more exposure.  One loophole this feature caused to the app was, that this leaderboard had a suspected tampering with the points and this made impossible for the users to climb-up and achieve high positions on the leaderboard.

Periscope was ruling the market when Meerkat was already struggling for its existence. The growth rate of Periscope was pretty high and difficult to achieve. The Meerkat team found it difficult to match up and challenge Periscope. Also their much of the focus on celebrity involvement diverted their mind away from the basic features of the app.

I am ToOLOwl. I have few friends in my nest; whenever someone requests a tool’s review or I pick a one out of my interest, someone in the nest does research on the tool, someone takes a tool’s walkthrough and some of them share their experiences and expert advice. Based on all; I give it a  stereoscopic vision and present important insights for you to go through and ease your selection process for tools. Wish you Happy reading, Easy choosing.
Previous Online Email platform Product Review- TMail21
Next Marketing Tools Product Review- Zotabox