Lessons To Be Learned From PoliMobile 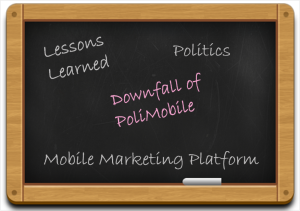 PoliMobile was a product which was developed to manage text message campaigns during political elections. The founders of the product PoliMobile was pretty enthusiastic about this project after he interviewed several people involved in political campaigns during elections. He found out that although emails are one of the best means to send messages or to connect with the voters encouraging to cast votes. But, if these emails flood people’s inboxes, they may be thrown into the trash or directed as spam with not much efforts and without even the recipient reading them.

Text messages right into their phones are, therefore, one of the direct methods to grab the attention of the people. Text messages, according to the founder, is a message that is ensured to be read by the user as they arrive right at the tips of people. Although people have now shifted to social media now for everything media has to say, still, a text message is a medium that directly strikes the audience.

The idea behind PoliMobile as inspired by the tremendous response the election campaigns Senator Ted Cruz of Texas and Hillary Clinton received. During their campaigns, they asked their voters to text them during speeches announcing their campaigns this year. Text messages were also an indication of the ease by which cell phone numbers can be collected and saved in a database. Appreciating Hillary Clinton’s text messaging campaigns from the voters, all the messages were replied back by the campaign team with an image of Hillary, wearing sunglasses, glaring at her blackberry showing “Text from Hillary” meme and a blog.

Getting Started with the project

Inspirited by the Hillary and Ted Cruz’s successful political campaigns, the founder kick started his project PoliMobile having high hopes for the success and generating revenue. All of the life savings was invested in this project- bring the mobile marketing platform into the politics.

After working hard for the duration of three years, with efforts of 70-80 hours a week, a little success and two pivots. The team left the final decision to the results of the meetings with almost 20 campaigns staff people.

Most of the people did not approve and showed no interest in this project- claiming that text messages are the medium through which no one engages. They did not capture attention towards the message and motive of the campaigns and so on. Although their smartphones never left their hands.

Moments later, the product was happily killed. Despite of the failure, the founders learned a few lessons.

Due Diligence Never Ends
Although the product’s BETA version received great reviews, and political advisors offered great advises for campaigns, but probably, they were not asking the right questions. They also learned that most of the funds raised goes into media buys. The rest into food for the volunteers, rest of it goes towards minuscule salaries and to the people who manage them. That rest that remains is worthless. The lesson learned here was to never quit carrying out due Diligence- it will pay off sooner or later.

Customers Pay You
At some point, developers try to bring in users, the people who go through your product. Also based on their reviews, companies makes changes into he product to make it more usable. But, the irony is, users never use them later. Rather, customers are the people who actually are the right people in such cases, who pay for the service they render.

Timing Matters
One of the most important things to launch a product like this is pitching it at the right time, when the market is ready for it. It doesn’t pays off when the market is not ready to accept your product despite of all the hard work and efforts you put in.

I am ToOLOwl. I have few friends in my nest; whenever someone requests a tool’s review or I pick a one out of my interest, someone in the nest does research on the tool, someone takes a tool’s walkthrough and some of them share their experiences and expert advice. Based on all; I give it a  stereoscopic vision and present important insights for you to go through and ease your selection process for tools. Wish you Happy reading, Easy choosing.
Previous 3 Keys To Effective Business Planning
Next Marketing Tools Product Review- crowdVirality