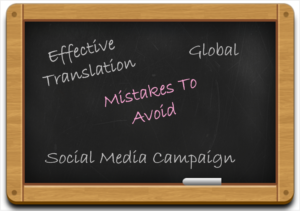 Social media marketing plays a vital role in the success of any product in this digital age. This is the reason any mistake in social media campaign can be bizarre for your brand’s reputation. It becomes more critical when you are targeting the global market. There you have to deal with the group of people, culture, languages, and ethnicity.

So, take every step very carefully, because every step of your’s will determine your “success or failure”. So, to help you here is few guidelines that must follow to achieve success in the global market:

Though English is a global language, it is not enough to echo your voice globally. Thus, you must use the local language to market your product. Learning each and every language of the world is not possible for anyone. Then how can you communicate with people in their native language….???? The first thing that strikes your mind is the translator software, they ease your task for once but can also do blunders sometimes. Just like it did in the KFC campaign in china where it translated “Finger-Lickin-Good” to “Eat your fingers off”. So, you cannot rely on this software. Instead, indulge a local person into your campaign who knows the exact translation of the language and is well aware of the culture and traditions of the region and can help pitch the idea.

Facebook has become synonymous with digital marketing. Every person’s first choice for social media marketing is Facebook, as is the most used Social media channel. But merely advertising on Facebook is not enough and you need to explore other dimensions too. Thus, you must also use WhatsApp for your campaign since it is the second most popular site after Facebook, followed by Twitter, Tumblr, Instagram, and YouTube. Also, at some places, snap chat is common while at other places weChat is common. Likewise, Facebook is ideal for Business to customer communication, while LinkedIn is the best choice for business to business transactions. So, these differences must be kept in mind while designing the campaign.

The best way to connect to people is to know their culture in depth. The more you adapt yourself to their culture, the more they will love you. They will start to consider you as part of their family than mere an outsider. Thus, one must learn everything about the culture of the targeted audience. Be it their language, attire, music, art, literature, dance or any other tradition. This will help the organization in designing the right campaign for the right audience. Just as KFC started rice bucket in Singapore considering their preference. Similarly, McDonald’s included pasta dishes in Italy. So, every campaign should be so designed that it is culturally acceptable for the locals.

In a research, it was found that more than 40% of European Union denied buying online from websites which are not in their native language. This shows language play a very important role in global marketing. So maintaining social accounts in just one language won’t be of help in the global market. Separate Accounts must be created in targeted language to reach out to people. Also, a mobile-friendly website should be made so that it can be accessed from user’s mobile anywhere anytime. Because the majority of the customers prefer to buy over their mobile phones these days.

In simple terms,  the article wants to convey that in this competitive world effective marketing is the key to success. Thus, one must follow the must avoid the above-mentioned mistakes for success in the GLOBAL MARKET.

I am ToOLOwl. I have few friends in my nest; whenever someone requests a tool’s review or I pick a one out of my interest, someone in the nest does research on the tool, someone takes a tool’s walkthrough and some of them share their experiences and expert advice. Based on all; I give it a  stereoscopic vision and present important insights for you to go through and ease your selection process for tools. Wish you Happy reading, Easy choosing.
Previous Never Let Your E-Mail Go Unnoticed!!!
Next Top Project Management Tools Product Review- Deskun

Startups are the equivalent of small fish in a shark tank. They are the most …