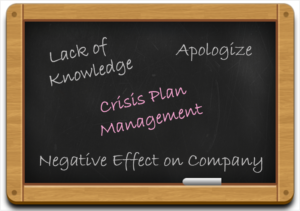 Reputation is the most important thing in every sphere of life. It takes years to create a good reputation but it only takes a mistake to cause irrevocable damage to it. Talking about the digital world the problem becomes acute, one wrong message and your reputation are tarnished.

Social Media crisis can occur anytime, it could be due to a faulty product, or any provocative comment, or any social post that hurts public sentiments. So, looking at the criticality of the problem, it becomes mandatory for every business to have a Social Media Crisis Management Plan, in order to safeguard their reputation.

Social media Management plan can be divided into two parts:

As we all know “Prevention is Better than Cure”, so is always advised to take preventive actions before its too late. Social media crisis badly affects the reputation of the organization. Thus, following preventive measures could be taken to avoid crisis:-

Keep a Hawk-eye
You need to be a good listener to be aware of the happenings of the social media. For that social media listening tool is required that gives you real-time updates and helps to draw conclusions by analyzing data. With the help of such a tool you can know about all social media occurrences, and thus you can get a hint if the crisis is about to occur. And thus aids you in taking corrective measures.

Crisis Definition
The crisis is a catastrophic problem that could affect the goodwill of the company. Thus, defining the crisis becomes the most important part of the management plan. Any negative comment about the product on the social media doesn’t count as a crisis. Instead, a crisis can be classified as follows:

Once the crisis has occurred, one cannot take preventive measures anymore. Strict action is to be taken to fight the crisis situation. Following are the management strategy:

Acceptance
Take full responsibility for the problem, and assure that it will be fixed shortly.

Apologize
Never refrain from apologizing. If you say sorry and pledge to fix the damage, people might forgive you.

Creating Crisis Web Page
Instead to answering to each and every query, create a web page containing all the details of the crisis. And whenever someone asks about it just give them the link. This will save your time.

Concentrate the traffic on a single social media channel
It is difficult to answer the people on different channels at the same time. So try to gather the crowd on one particular social media platform and address their problem there. This will help track the crisis situation and also alerts you about any new crisis that could come up.

Restrain oneself
Never indulge in an argument on social media. This will worsen the situation. You must keep your calm and handle the situation wisely.

Keep everyone informed
Every employee of the organization must be informed about the crisis.

Post-crisis evaluation
Perform a detailed review of the crisis and keep the copies of all the social post, tweets, and emails for future references. Create a detailed report of the issue, identify the cause, and form an effective crisis management strategy to deal with any crisis in future.

In conclusion, we can say, stay updated and careful while using social media. Follow the social crisis management strategy to deal with any of the crisis situations.

I am ToOLOwl. I have few friends in my nest; whenever someone requests a tool’s review or I pick a one out of my interest, someone in the nest does research on the tool, someone takes a tool’s walkthrough and some of them share their experiences and expert advice. Based on all; I give it a  stereoscopic vision and present important insights for you to go through and ease your selection process for tools. Wish you Happy reading, Easy choosing.
Previous Marketing Tools Product Review- NulaBox
Next Marketing Tools Product Review- Rufus