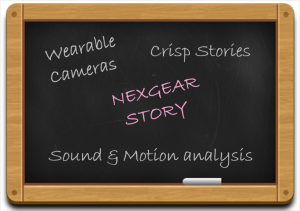 Amardeep Singh, an Aerospace Engineering graduate from IIT-Bombay along with his college mates, started ideaForge. His journey mostly included developing and flying drones. He spent most of his time documenting and shooting everything he saw. Most of his photos are captured by DSLRs, FLIPs or GoPros. The company worked with drones eventually led to the foundation of NexGear.

In the process of carrying cameras on every trip, the data needed to be transferred to another drive. Amardeep Singh found that he never had time to look at the raw footage, select or edit it. He then realized that this a common problem faced.

So then he began discussing the problem with his friend Rahul Vats. Slowly they learned that mobile devices were becoming popular in capturing videos and sharing, but they found that own video were not shared much. It led to the beginning of NexGear with a core to develop wearable tech devices. They developed the first product “Frodo” which was a strap on capable adventurous camera. It was capable of automatically editing the captured footage into quick summaries by picking original parts from the video.

Amardeep needed a dedicated team to develop Frodo instead of a fancy workplace. Amardeep and Rahul wanted to build a transparent and trustworthy company. The team included Tarun Gupta, an investment banker, and marketer; Vishal and Rohit Tandon, who had more than ten years of experience in user interface, branding, and art direction.

The Fights with Hardware and Software

Amardeep says that a hardware-software product is something that comes with problems from both the side. Hardware challenges like breakdown, delayed components, and issues in mechanical filament attack from one hand, whereas software challenges like backend and bug fixes attack from the other side. The product is a strap on and can be strapped anywhere from the wrist, the forehead to even the handle of the bike. With 0.7 seconds as the boot-to-shoot time, the product can capture 1.5 hours of HD video when it is fully charged. When you turn on the NexGear app on your phone, it automatically detects the devices, syncs with it and creates crisp stories based on the pre-installed styles like Genius, Slow face, Action and 15- second Instagram. To figure out interesting parts of the video, the device uses sound analysis, face detection, motion analysis and computer vision.

The company first announced about Frodo at a Consumer Electronics Show, Las Vegas and is looking to start a crowdfunding campaign shortly. The team has raised an angel funding from growX ventures and Powai Lake Ventures. The next plan is mass production of Frodo and makes it a brand. The team will focus on Artificial Intelligence to make the product even more intelligent.

I am ToOLOwl. I have few friends in my nest; whenever someone requests a tool’s review or I pick a one out of my interest, someone in the nest does research on the tool, someone takes a tool’s walkthrough and some of them share their experiences and expert advice. Based on all; I give it a  stereoscopic vision and present important insights for you to go through and ease your selection process for tools. Wish you Happy reading, Easy choosing.
Previous Communication Tools Product Review- Relay
Next Top Marketing and Sales software Product Review- Prospxt